When I read Australian fundraiser Jonathon Grapsas’ March post about how one nonprofit had managed to raise over $100,000 in monthly gifts via Facebook I was intrigued and mildly incredulous.

I believe that social media is invaluable to nonprofit organisations, particularly the small nonprofits, but I confess that I always thought of it as an initial first step in an organisation’s marketing strategy. When it comes to actual donations, I’ve reflected back upon the numerous Facebook birthday-wish gifts I’ve made to various causes without receiving a thank you, let alone a follow up, from a single organisation.

So I arranged to phone Jonathon to talk to him about fundraising in general and, in particular, about the exceptional social media fundraising success of the Soi Dog Foundation and their $100,000 monthly gifts from Facebook users. (Jonathon is the brilliant head of fundraising innovation for Pareto Fundraising in Australia and publishes one of my favourite fundraising blogs.) Jonathon was kind enough to connect me with Leonard Coyne, the genius behind Soi Dog Foundation’s fundraising and Leonard quite generously agreed to be interviewed over the phone.

The Soi Dog Foundation works to help the homeless, neglected and abused dogs and cats of Thailand by reducing pain and suffering through humane population control. From February to November 2010 (a mere nine months) the Soi Dog Foundation saw a 350 per cent increase in monthly donors, attributed primarily to Facebook traffic. Pretty impressive, no? 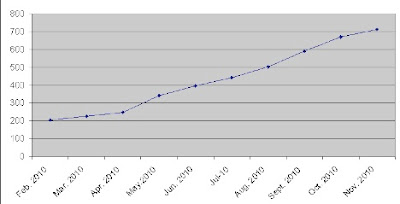 How did he do it?

As Leonard told me, ‘There’s a lot of noise about social media, but it’s a very ephemeral noise. Too many organisations start up a page or group but there is no discipline in taking it forward.

‘Although many organisations believe that they should establish a group instead of a page (or both) this is not the case. Although groups allow you to ‘mass message’ the group’s members, it is typically fairly ineffectual and regarded as yet another Facebook annoyance if done too frequently. Groups were designed for use by people who have a similar interest. Pages on the other hand were specifically designed to represent an organisation. Pages also offer much more functionality and customisation than groups. Be careful not to confuse your audience with too many pages and groups representing your organisation. One page is the best approach.

‘Nonprofits also need to recognise that an investment of time is required to grow your fan base. One thing that works really well for us is to actively post every other day asking fans to ‘invite’ their Facebook friends to “like” us.’

Leonard’s right, it will definitely take some time to reach that initial mass of active followers who will begin to spread the word organically. The key is consistency. Actively pursue new Facebook followers by way of your regular communications, your organisation’s website, your newsletter, email signatures (don’t forget to create email signatures for your board members as well), and via your blog and Twitter.

Here are a few other tips for Facebook advertising. Leonard only advertises to women and suggests that in order to find out who you should be targeting, test by age, gender, relationship status, location, education, workplace and any other relevant categories you can think of. This is where your ideal donor profile comes in handy. The best way to get started effectively is to tighten down the criteria to a minimum audience reach of 20,000 people. Figure out what a $20 a month recurring donation is worth to your nonprofit and package it in a way that best appeals to your target audience.

What else can you learn from Soi Dog’s success? I liked the interactive sidebar applications that any organisation can emulate immediately on its own Facebook page. Leonard likens each one to a mini web page. 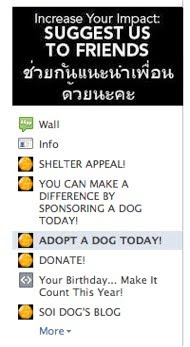 And, if you’re looking for greater engagement, be willing to relinquish some control. As Leonard notes, ‘It makes perfect sense to utilise Facebook for fundraising. Facebook is a social environment. People use it to interact socially. People are sick of you talking at them. Have dialogues with them, establish relationships and train others to do it. And add heaps of photo galleries.’

For more information on Soi Dog’s strategies, be sure to check out Leonard’s presentation on Slideshare.

How to be a fundraising hedgehog

In his book Good to Great – Why Some Companies Make the Leap… And Others Don’t (Random House Business Books, 2001), Jim Collins tells a story about a hedgehog and a fox. Actually, it’s Isaiah Berlin’s story, but here’s how Collins tells it:

‘The fox is a cunning creature, able to devise a myriad of complex strategies for sneak attacks upon the hedgehog. Day in and day out, the fox circles around the hedgehog’s den, waiting for the perfect moment to pounce. Fast, sleek, beautiful, fleet of foot and crafty – the fox looks like the sure winner. The hedgehog, on the other hand, is a dowdier creature, looking like a genetic mix-up between a porcupine and a small armadillo. He waddles along, going about his simple day, searching for lunch and taking care of his home.

The fox waits in cunning silence at the juncture in the trail. The hedgehog, minding his own business, wanders right into the path of the fox. ‘Aha, I’ve got you now!’ thinks the fox. He leaps out, bounding across the ground, lightning fast. The little hedgehog, sensing danger, looks up and thinks, ‘Here we go again. Will he ever learn?’ Rolling up into a perfect little ball, the hedgehog becomes a sphere of sharp spikes, pointing outward in all directions. The fox, bounding toward his prey, sees the hedgehog defence and calls off the attack. Retreating back to the forest, the fox begins to calculate a new line of attack. Each day, some version of this battle between the hedgehog and the fox takes place, and despite the greater cunning of the fox, the hedgehog always wins.’

People are similarly divided into foxes and hedgehogs. But it is the hedgehogs that make the biggest impression because they simplify the complex into a single, simple unifying idea. Think of Karl Marx and class struggle, Charles Darwin and natural selection, Ken Burnett and relationship fundraising. These are people who have looked at a complex world and found a way of simplifying it. They are hedgehogs.

Collins goes on to argue that all the great companies have a ‘hedgehog concept’, a simple, clear idea that drives everything that they do. For the US pharmacy chain Walgreens it was this: ‘To run the best, most convenient drugstores (pharmacies), with high profit per customer visit’. Once they identified this as their hedgehog concept, they implemented it with fanatical consistency, replacing inconvenient stores with more convenient ones, even closing good stores if the opportunity arose to replace them with potentially great ones. As a result, Walgreens’ stock performance outperformed the rest of the market by a factor of 15 between 1975 and 2000, leaving the likes of Intel and Coca-Cola trailing far behind.

But a hedgehog concept isn’t a goal or a strategy. It’s an understanding of what it is that you can be best in the world at. More specifically, your hedgehog concept can be found where the answers to these three questions overlap.

What can you be best in the world at?

What are you deeply passionate about?

What drives your economic engine?

So what does this have to do with fundraising? Well, I think there’s one, simple thing that most charities could realistically aim to be best in the world at. And it’s something that would definitely drive your economic engine: donor care. The question is, are you deeply passionate about it?

Whether you’re a big charity or a small one, in whatever sector or country, you could be the best charity in the world at donor care. All it needs is the passion to do it and the determination to make it happen.

The small Canadian political party Animal Alliance Environment Voters Party of Canada (AAEVPC) is hardly a household name, even in Canada, or a widely recognised cause, but they seem determined to become the best nonprofit in the world at donor care. You can read about how they retain 70 per cent of new donors in this recent post on The Agitator.

Just to put that retention figure in context, in The Agitator’s donor retention survey nearly two-thirds of charities reported that less than 40 per cent of donors ever make a second gift.

So here’s a free hedgehog concept for you to adopt for your charity:

We will be the best charity in the world at caring for and retaining our donors resulting in a high lifetime value per donor.

Take that to heart, make it the basis of everything you do, and riches will follow. Guaranteed.