How often should we ask?


It may be the wrong question, but it deserves an answer.

This is one of those questions that pop up with depressing regularity in fundraising and to which there’s really no right answer. Other examples of the genre include how long should a fundraising letter be, how often do donors want to hear from us and how many words should there be in a PS? It’s a bit like, how long is a piece of string? Attempting to answer can be cathartic and at times instructive, but really, if we’re honest, it’s not the question that should challenge us.

The only correct answer is the unhelpful, ‘Well, it depends.’ Which could be followed with another question, ‘How interesting, engaging and worth hearing from are you?’ But I guess that’s really not good enough.

Twenty years ago this coming April I brought out a book called Relationship Fundraising, which made me nearly famous in a small field. Fame of this sort can be a two-edged sword. Over the years people have come up to me at conferences and said things like, ‘You know you said on page 137… or, ‘You said, in your third chapter, that if we would just…’

Usually I’d look at them blankly and deny everything. If quick-witted enough I’d hide my name badge, fake an Italian accent and plead mistaken identity. That rarely worked. Then I’d haver a bit and confess that I can’t actually remember what I wrote all that time ago. That, as you can imagine, impresses nobody.

I’ve found that people often assume things about that book, perhaps because of its title or general thesis. One thing many assumed is that in it I prescribe what kind of relationship fundraisers should have with their donors. And that I decree it should invariably be close, personal, warm – even intense.

I don’t. Because, of course…it depends.

Similarly with how often we should ask. Recently a correspondent in SOFII’s LinkedIn discussion group suggested that I’ve misled the fundraising fraternity all these years. He accused me of, ‘promising people that if they just ask less, they’d raise more.’

That doesn’t sound right. I’m rarely either that specific or that prescriptive. I’ve searched my writings and can’t find anywhere any advice to ask less. Ask better, sure. Ask more sensitively, of course. Listen to your donor and take account of his or her wishes, for certain. But not ask less.

Unless that is, you’re already asking too often. My correspondent (see above) felt the mere mention of this an admission of guilt – he was outraged that I should utter such a phrase. I responded by saying that, by definition, asking too often is…too often.

He came right back at me with, ‘Really? Says who, you?’

I kid you not. This highlights the trivia to which such debate can quickly descend. It’s not merely a question of semantics, it can get plain silly. The other phrase he objected to my agreeing with was, ‘don’t over ask.’ It was time to stop the conversation, I felt. After all, these were his phrases that he ascribed to me, not mine originally. 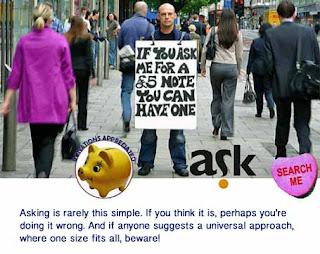 So, really, how often should we ask?

Well of course we shouldn’t over ask or ask too often, that’s blindingly obvious. However, defining too often would be a generalisation I’m no more qualified to make than anyone else.

It’s not about how often you ask. That’s simply too mechanical. It is about how well you ask, which involves opportunity, sensitivity, setting, language, history, culture, tradition, preparation, empathy, urgency and need. We have to consider our timing, our storytelling ability, the donor’s comfort, interests and potential for resentment and our ability to inspire and create rapport. And the rest. There can be no optimum number to cover such an intimate and personal inter-relationship. I wouldn’t pronounce upon it any more than I might aspire to tell people how often they should have sex.

The first edition of Relationship Fundraising appeared before the recent fashion for making 17 asks on page one of a direct mail letter. Otherwise I might have commented about that. As it happens I know this procedure can be effective. Equally, I can see that from the donors’ point of view the practice might after a while become wearisome. Fundraisers should test it, ask their donors, consider its long-term as well as short-term implications. It may work in some circumstances for some causes, for others not. There is no one size fits all.

The ideal situation is when the fundraiser doesn’t actually have to make a physical ask. The need is so evident and the donor so enthusiastic she will volunteer her gift at the right time or even jump in ahead. The fundraiser still needs to control this situation, but it’s a nice place to be.

We should recognise and cultivate the implicit ask. When Mohammed Amin filmed those long, disconsolate lines of mothers and babies starving in Ethiopia the ask was instantly evident from the faces in that queue. So people here were queuing up to give well before Bob Geldof issued his famous profanity. Many organisations benefit from the implicit ask – the Red Cross, Salvation Army, NSPCC. We close our eyes, imagine and the case is made. Lesser known causes have to work at it. Often the ask needs no more expression than the look in a child’s eyes. Or the offer in a headline. The fundraiser still needs good timing, judgement, inspiration, persistent application and luck. Often we have to learn to let our cause do most of the work for us.

Is a long-term relationship more important than a short-term ask? Again, I don’t think I can always answer that question, for every situation. You must decide. Generally it is. Are there times when a short-term need might necessitate putting other considerations aside and asking anyway? I can envision that, sure. And if the relationship is worth anything, I think mostly it’ll survive and even thrive because of that short-term need. If the ask is right.

The ask is often – even usually – for something much bigger than money. Will you make a blind man see? Will you change a child’s life? Good feedback too can replace the need for an explicit ask in the donor’s mind. It worked, was great value for money, so I’ll do it again.

Saying thank you, we all know, can present the best fundraising opportunity of all. But if while thanking you ask again, you’d be wise to be careful and be sure to ask right. Any fundraiser can decide, after reviewing the arguments for and against, whether or not it's right to ask in a letter of thanks. Then to make a policy decision for them and their organisation. But clearly this also is a question where there’s no absolute right or wrong.

Can less sometimes be more? Well, talk to donors. I’ve not met many who relish being asked for money 17 times within the first few minutes of meeting a fundraiser. Ask like that and before long fundraisers will be regarded with the same enthusiasm as insurance salesmen. If we’re not there already…

So for the fundraiser what matters is not just to ask but to ask right. Asking right isn’t easy and presents fundraisers with several challenges: who to ask, when to ask, where to ask, how to ask and for what? If you really understand your donor and are sensitive to the signals he or she is giving, how often to ask is perhaps the least difficult of these challenges.

I will say though that generally we should ask more. Because asking is the high point of effective donor relationship development. And the more we do that the better. But bald, naked, random, indiscriminate and repetitive asking, that I am sure we should avoid. We can aim higher.

So there are my views. I don’t recall ever suggesting we ask less. Less stridently, perhaps. Less insensitively, I hope so. But not less, absolutely. For that is what we’re here to do: to ask. All I’ve learned is that it really pays us to ask right.

I hope I have now made this clear.

Ken Burnett is a director of Clayton Burnett Limited, The White Lion Press Limited and he’s a former chairman of the board of trustees at the international development charity ActionAid. He’s author of several books including Relationship Fundraising and The Zen of Fundraising and is managing trustee of SOFII, The Showcase of Fundraising Innovation and Inspiration. For more on Ken’s books please click here. To sign up for free notifications of Ken’s future blogs, click here. You can unsubscribe at any time.


This article also appears on Ken Burnett’s blog, see here.
Posted by SOFII at 05:10 No comments: